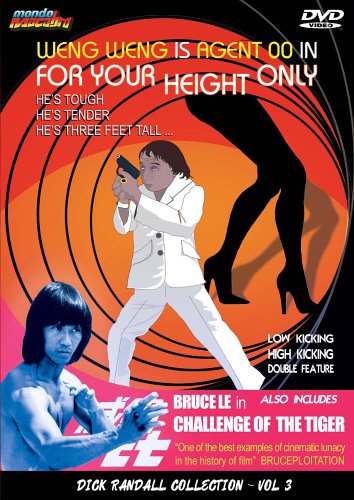 FOR YOUR HEIGHT ONLY/CHALLENGE OF THE TIGER

For Your Height Only is a legend amongst lovers of truly "out there" cinema. A film about a two and a half foot tall Filipino secret agent: a kung fu master and suave loving machine who struts his stuff in a Travolta style white suit...

Can it be true that such a film exists? It can and it does. Unquestionably one of the most whacked out movies in the world, it tells the incredible story of how agent 00 - played by the legendary Weng Weng - takes on the mysterious "Mr Giant" and his death dealing gang of white slavers and drug dealers. See him fly through the sky in his mini jet pack, see him fell his opponents with below the belt kung fu action....just see him!

The disc also features the amazing Bruce Le - king of Brucesploitation - in his best film ever. Red hot martial arts action and thrills as two secret agents race around the globe to foil a crazed madman’s plans for world domination. Presented here for the first time ever on DVD in a stunning new 2.35:1 widescreen transfer.