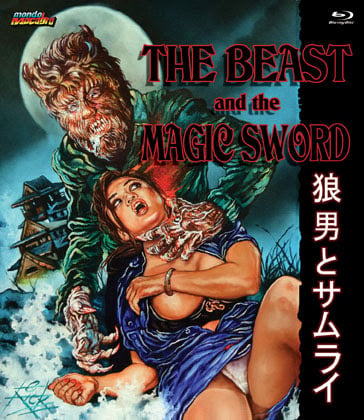 THE BEAST AND THE MAGIC SWORD - retail edition

BEAST AND THE MAGIC SWORD is the last great film from Spanish horror legend Paul Naschy. Although he would go on making and planning films until his death in 2009, he never again attempted the epic sweep and grandeur of this 10th entry into the saga of Waldemar Daninsky, the man afflicted by the curse of lycanthropy.

In this film we get for the first time an origin story of how the Daninsky curse began back in the 10th century. We then move forward to 16th century Japan where Daninsky has travelled in search of a cure to his affliction. Co-starring Japanese stage and screen veteran Shigeru Amachi, and shot in the studios of Toshiro Mifune, THE BEAST AND THE MAGIC SWORD is a highly successful and colourful melding of European werewolf legends and dark Japanese fantasy. It features a fight between werewolf and tiger, an evil scarlet cloaked witch who imprisons Daninsky, a sword fight with a troupe of ghost samurai, and many other unforgettable scenes.

This is the first Blu-ray release of this film and its first ever US release.

Brand new 4K restoration from original negative
Region Free
Presented with two viewing options, one in a 1.33:1 aspect ratio, and one in 1.66:1
Spanish language track with English subtitles
Archival intro to the film by Paul Naschy
Archival documentary SMILE OF THE WOLF, with Naschy discussing all of the films in the Daninsky cycle
New audio commentary by Rod Barnett and Troy Guinn of The Naschycast
New interview with Gavin Baddeley, author of the book The Frightfest Guide to Werewolf Movies