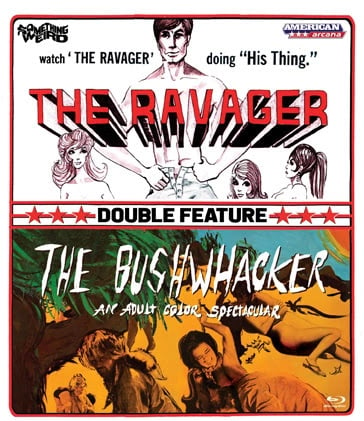 IN STOCK AND SHIPPING NOW!

THE RAVAGER and THE BUSHWHACKER represent the last hurrah for rough and tumble 60s style sexploitation before hardcore sex films completely took over the market. In lieu of graphic sex, exploitation films in this era leaned on violence to give the audience the sick thrills they were looking for. These two films are basically the last gasp, the final push on the envelope of this genre towards more extreme, horror-oriented fare, and in this they were perhaps too extreme for the raincoat brigade. After their brief theatrical runs, both disappeared for decades until unearthed by Something Weird Video in the 2000s.

THE RAVAGER was the brainchild of Belgian cinematic weirdo Charles Nizet, whose life was as bizarre as any film he made. But THE RAVAGER is perhaps his craziest movie, and stars Pierre Agostino, a regular in the films of Ray Dennis Steckler from the same period, as a PTSD stricken Vietnam vet with a peculiar kink for peeking on couples making love and then blowing them to smithereens with homemade bombs.

THE BUSHWHACKER was made by longtime exploitation maven Byron Mabe, who directed the classic SHE-FREAK. After their plane goes down somewhere in the deserts of the American southwest, a party of one alpha male and three lusty ladies are pursued through wild by an insane, coonskin-cap-wearing killer, who has an insatiable taste for female flesh.

Both films occupy a strange space somewhere between the roughies of the 1960s and the slasher films of the late 1970s and early 80s. Which probably explains why they were MIA for so many years. American Arcana is proud to present these unique exploitation films on Blu-ray for the first time anywhere in the world, uncut and taken from the best available elements straight from the Something Weird Archives.

Region free
1080p presentation of both film taken from 2K scans of rare 35mm prints
Missing gore scene(in SD) from THE BUSHWHACKER reinstated, making this the most complete version of this film ever presented on video
Trailers for both films
A selection of trailers from the SWV Vaults