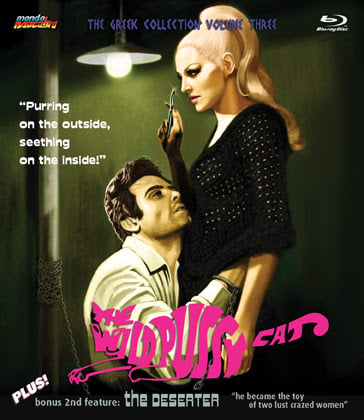 The Wild Pussycat is an unsung classic of exploitation cinema. Produced in Greece in 1968, it was not officially released there until 1972 and then only in a cut and compromised version. The simple plot concerns a women whose sister was exploited and driven to suicide by a sleazy pimp. In order to get revenge on him the woman seduces the man, drugs him and imprisons him in a sound proofed room, tormenting him through a large one way mirror (he can see out, no-one can see in ) by performing sultry strip tease dances and having sex with men and women while he can only look on, helpless to stop it or join in. Her final vengeance on him is so shocking it raises eyebrows even today.

In spite of its lurid subject matter and explicit visuals, The Wild Pussycat was not a low budget quickie with a cast of unknowns and a first time film maker. It was directed by Dimi Dadiras, one of the most successful director/producers of the period, and it features one of the big stars of Greek cinema, Gisela Dali, known in her day as ”the Greek Bardot”. So far as we are aware, this film has never before been released on home video anywhere in the world.

THE DESERTER
Directed by Christos Kefalas
Greece, 1970, black and white

This rarely seen Greek production from 1970 is a fascinating and powerful film about a young soldier who escapes from a seemingly endless war only to find himself trapped in an emotional and sexual battle between two desperate women. One of them, Ermina (played by Italian star Franca Parisi), is stuck in a loveless marriage with a boorish farmer who plans to make his fortune by selling cheap hootch to soldiers. The other - much younger - woman, seems to live in a bizarre and dangerous fantasy world. She is played by famous Greek singing star Alexandra Kyriakaki. The great Gisela Dali “the Greek Brigitte Bardot” also stars in this production, in a small but unforgettable role as a witch who casts a love spell on the soldier.

The film was edited by Italian genre specialist Bruno Mattei. He also claimed to have directed much of it and a few years later released a version of it in Italy, with himself credited as director, under the title of Armida, il Dramma di Una Sposa (Armida, a Wife’s Story).

As with The Wild Pussycat we can find no evidence of this film having been released anywhere on home video before.