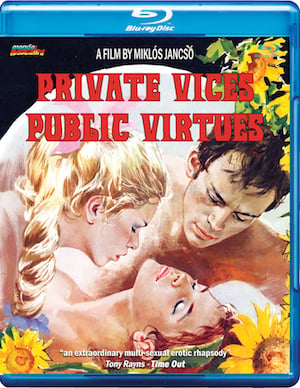 Miklós Jancsó (1921-2014) was one of the giants of European art cinema. He had been making films in his native Hungary since 1958, but in 1966 he exploded onto the world scene at Cannes with THE ROUND UP. The international critics had never seen anything like it. Combining cinematography with choreography, Jancso films crowds of soldiers on horseback, peasants, and partisans as they perform a ritualistic dance of love, life and death on the bleak Hungarian plains. Ostensibly a costume piece about the 1848 revolt against the Austro-Hungarian Empire, the film was widely interpreted as a thinly veiled attack on the aborted 1956 Hungarian uprising against Soviet Russia.

Over his next five features he developed and refined a hypnotic and fluid technique via long, sweeping camera moves and crane shots. Filming in color, his productions became like dazzling "happenings", combining music, dance, naked bodies, horses, men in uniform and spontaneous bursts of singing into a seemingly eternal tracking shot. His films were widely screened at festivals and in art house cinemas. His was a name to drop, an influence to quote.

Then, in the early 1970s, Jancso moved to Italy and began working with new collaborators. Times were changing. It was a post-1968 world and a new explicitness was being seen onscreen, coupled with a certain sense of betrayal about the ideals that had seemed so achievable only a few years before. PRIVATE VICES PUBLIC VIRTUES, made in 1975, reflected both these factors.

The story is based on the famous Mayerling incident where Crown Prince Rudolf of Austria was found dead beside his 17 year old lover in an apparent joint suicide. However as with his earlier productions, the director only used history as a jumping off point. The film is pure Jancso. The long tracking shots are there, the horses are there, the naked bodies are there, as are the snatches of folk music and group singing.